The University of Washington retained Milliman to conduct a cash compensation study for its professional staff positions.

Milliman evaluated cash compensation for 56 benchmark jobs in the University’s professional staff group. Base salary and total cash compensation data were collected from regional and national institutions of higher education via a custom survey for 38 jobs and published surveys for 42 jobs.

The custom survey was distributed to 77 target institutions. Twenty-six institutions participated in the survey (approximately 1/3).

The 56 benchmark jobs, chosen by the University’s Compensation Office, the Professional Staff Salary Survey Advisory Group and Milliman, provide a solid representation of benchmark positions within the University’s grade structure and across job groups as summarized by the tables that follow.

Market conditions have changed gradually since the period when the last survey was completed; minimum wage has shown more aggressive increases.

The chart on the following page illustrates the changes in market compensation over the past 32 years and also shows the University’s annual professional staff salary increase merit pool percentage for the most recent 25 years.

The 56 benchmark jobs, chosen by the UW Compensation Office, the Professional Staff Salary Survey Advisory Committee, and Milliman provide a solid representation of jobs and employees within the University’s grade structure and across job groups as summarized by the tables below.

This analysis covers professional staff jobs in grades 5 through 11, which includes 9,813 employees.

The University is limited in the value of its total compensation package by the absence of annual and/or long-term incentives. Historically the University has addressed this limitation by:

Providing benefits that are above average in the market. Medical, dental, disability and retirement benefits have traditionally been, and continue to be, above the median and close to or above the 75th percentile when compared to Milliman’s database.

Additionally, when making a national hire the University is more challenged than many of its peer institutions because of its location. The cost of living in the greater Seattle area is roughly 49% higher than the national average, according to Economic Research Institute data. Cost of living certainly impacts the decisions of potential employees from other parts of the country. While the cost of labor in Seattle is 12% higher than the national average and new recruits can make more dollars here than in many locations, the difference can present obstacles to recruiting.

While the above elements can impact recruitment, the University provides a number of significant attractions beyond direct compensation. These include a highly desirable location, the opportunity to work at a premier institution of higher education, a stimulating work environment, job security, and rich cultural experiences to name just a few.

This compensation analysis included a custom survey of institutions of higher education and data from published surveys. Published data used are primarily regional in nature while the custom survey included universities across the United States (global challenge peer institutions as well as the University’s primary peer group). All national data in this report, both published survey data and data from the custom survey, have been geographically adjusted to reflect the Puget Sound area. 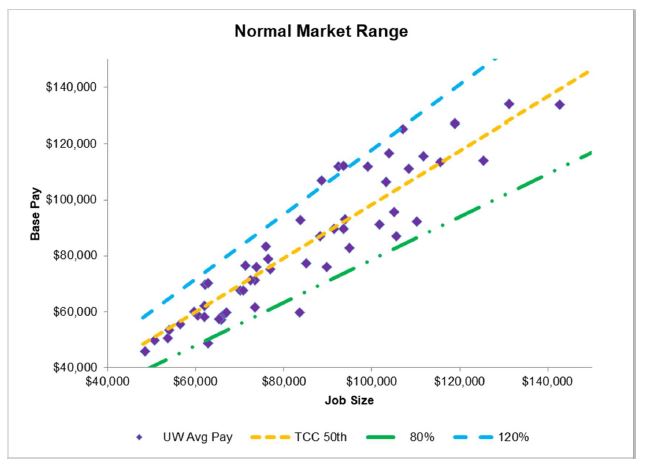 The University’s Compensation Office, the Professional Staff Salary Survey Advisory Group (a committee of professional staff employees) and Milliman consultants reviewed previous benchmark positions used in this study and identified an additional position for inclusion and elimination of two jobs that did not provide adequate data in the past.

The following table lists the benchmark positions and the survey data sources used for each job.

Custom survey invitees included peer universities and a group of regional higher education institutions (77 total). The following tables show organizations contacted and those submitting data for the 2007, 2012, 2015 and 2017 survey. Each year of the custom survey approximately 1/3 of the invited institutions participate.

Published survey sources included both regional and national surveys. The list of surveys used in these analyses follows:

Job descriptions were provided to custom survey participants to assist them with job matching. Milliman followed up with each articipant to clarify job matches and input where necessary.

Milliman consultants began with the University reviewed job matches from 2015 and also reviewed the University’s job escriptions and matched each position to one new data source in 2017.

Data provided in this report for all survey matches, where such data were available, (additional detailed data on market percentiles re included in the appendix) include base 50th and total cash 50th.

Milliman compared the University’s benchmark average data to the market median total cash compensation (50th percentile). ther comparisons can be made using this data, but Milliman believes the 50th percentile is the strongest point of comparison because:

Survey Code
The job code assigned to each benchmark job

Survey Job Title
The title of the similar job in the survey source (note: jobs w ere matched not based on title but on job responsibilities, etc.)

The University is generally competitive with the market, lagging by approximately 6.0% overall (weighted average) however, the level of competitiveness varies by job grouping and grade.

The following table shows how each job grouping has compared to the market UW Average Annual Pay versus TCC 50th over the last three studies.

The Research job group has been consistently lagging the market by 10% or more since 2012.

Health Care pay at the University has consistently lead compared to the market during the last three studies.

The following table shows how each grade has compared to the market (UW Average Annual Pay versus TCC 50th over the past three studies.

The most significant and consistent market lag has been with grade seven.

The following tables provide comparison by grades for the benchmark positions.